We’ve all had that moment when we realise that our favourite shoes or boots are starting to fall apart, consider that a few quid spend in the cobbler’s now would be well worth spending and then proceed to run said footwear to the ground? Worse still we’ve tried various concoctions of so called super-glue only to find that it was less effective than flour and water. 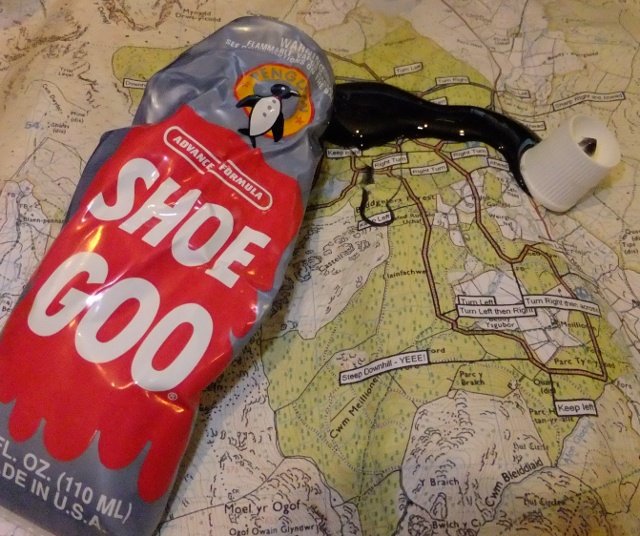 Finally though, there’s a glue that works for the kludger like me. Instructions might state ensure surfaces are kept clean as a chip processing plant, i’m more like back of the chippy, but this stuff still works. The usual premise of take 2 surfaces, place glue in between, ignore any instructions and either 1) Swear profusely when they don’t stick or 2) celebrate smugly if they do still holds. You’ll be pleasantly surprsed that you’ll be celebrating more than swearing.

So far i’ve used it to glue an entire heel back together (it had separated into 3 layers!) and then back onto the shoe, and that’s held for a fair few months. It’s also been invaluable in sticking back the rubber rand around my boots. My last pair went at the rand, it peeled off and water kept getting in. Shoe Goo meant that I’ve been able to stick the rand back down and keep the boots waterproof. The repair shown below has lasted a good few months and took only minutes to do.

If you think it sounds like hard work and anytime you try and glue or fix anything you make more of a mess than you started, then again you’ll be pleasantly surprised. The Goo in the name is well earnt and it’s the consistency of syrup or treacle (or monkey snot) and easily manipulated and wiped off. The result once I finished with it looked like someone had smeared glue all over walking boots, but if you can do worse than me then hats off you you sir. They’re probably due a second going over soon, but that’s a small price to pay considering both facts that new boots are £160 and I’m a tight git.

Walking into the Northern Carneddau from Llanfairfechan is significantly shorter than from Aber, and …

This circular walk up Pen Llithrig y Wrach and Pen yr Helgi Du starts from Capel Curig, and takes yo …