Mari Huws spent her 2016 ascending the 100 highest mountains in Wales, here’s her account of her year

My 2016 started uncertain, I had no job, I was back in North Wales for the first time in years and I was living with my parents. On a flight back after a period of working in Tokyo (and escaping to Japans highlands each weekend), I decided to dedicate the year to get to know my own country better, and do that through the mountains that defines it.

Cymru is the country I call home and the place that I’ve spent most of my life in. As a child our weekends were spent in the mountains, I’ve been hiking since I can remember, yet, until 2016, I had hardly hiked off of the beaten tracks of Snowdonia.

Realising this at the end of 2015, I decided to try and hike the 100 highest mountains in the country before the end of the year. This is probably the only new years resolution that I’ve ever kept, and it made my year a wild, windy and wonderful adventure.

From Yr Wyddfa, the highest mountain, standing at 1085m to the 100th peak on my list, Cyrniau Nod standing at a modest 667 meters- the challenge took me to completely new peaks, and made me see familiar ones from a different perspective.

I became confident in my map reading ability, and as my fitness progressed I made longer hikes, combining two days into one, hiking alone in wintery conditions, hiking for four days straight, hiking up one mountain in the morning, returning to the car and hiking another in the afternoon, completing the 14 peaks in mid May with still a month to go until the longest day- ticking off 17 of the 100 in 16 and a half hours…

I was planning my week around the best days to be out on the mountain, spending the other days looking for work and developing projects.

I ended up living 5 months of the year on Ynys Enlli (Bardsey Island) off the Llyn Peninsula working as an Assitant Warden. This left me with 7 months to hike the 100- and looking back now, although this was a very uncertain time in my life- being young, jobless and living at home- the mountains and the challenge gave me an aim, a project to write about and a reason to get out of the house.

The challenge had been inspired by a book published decades earlier, called Cant Cymru, written by Dafydd Andrews. This was my guide , the list I ticked off as the peaks were reached and where the name for my blog came: www.cantcymru.wordpress.com.

I would certainly suggest for anyone who likes exploring to make a list – be it the 100 highest mountains, or the 20 hardest routes in Snowdonia, or all the lakes, the quarries, all the mountains over 700 meters . . . What ever the goal you set, it will make you go to new places, which is where the magic hides!

But for me, it wasn’t about bagging peaks, or ticking off routes- it was about exploring, and finding new horizons within my own country. I hiked many of the mountains more than once in the year- and I’ve hiked them many times since, but there were definitely a few that I don’t see my self ascending any time soon.

Some of the most memorable days are the days I had to spend hiking the lonely peaks. Most mountains in Wales are connected by ridges but a few aren’t. These less trodden heather covered path-less peaks were memorable in their own quiet way. Where the land felt old and I could see where old drovers roads once ran.

I remember one late November hike, in light snow- the mist low on the ground between Esgeiriau Gwynion and Moel Hafod-fynydd, knee deep in a bog, no path or trig to see – aware that the day was short and the weather turning, thinking to my self – who would know if I didn’t make it to the actual peak?

But with my map out and reading the contours of the land, I stomped about the flat, field of a mountain for about 10 minutes until I was confident that I was stood on the highest point. I’m glad now I persevered. The year was about persevering.

The Berwyn hills on the other hand can all been hiked in a day: Mynydd Tarw, Foel Wen, Tomle, Cadair Bronwen, Cadair Berwyn, Moel Sych and Godor . . . and that had been the plan. But at the end of February, with the peaks covered in snow and the holes in the uneven ground undetectable underneath the white powder, me, my brother and a friend had only made it to the third peak before everyone had frozen feet where we had plunged through the snow into the icy bog below.

It’s all fun and games until your feet are cold, I remember everyone making the decision to return to the car just by looking at each other. It was ten months later, in December that me and a friend finished off the horseshoe. Again, the weather wasn’t fantastic, but I had a good feeling for those mountains and definitely want to return in summer months, perhaps with a tent, to hike those peaks again.

Talking of cold feet, for anyone planning to start exploring the mountains of Wales soon, kit is essential! I recommend that you first invest in a good pair of hiking boots, dependable waterproofs and a few warm layers. With a map and compass, an idea what the weather is doing and when the sun is setting – your good to go. The mountains are there for everyone to enjoy – be safe, be responsible and most importantly be free.

Hiking the 100 highest mountains in Wales made me understand the geography of my home land better, it made me dig deep at times to find that determination to keep going. But most of all it gave me a huge amount of joy- chasing the daylight in winter months, breathing fresh air from dawn till dusk and devouring many, many, many slices of cakes looking out at spectacular views.

While walking the 100 highest mountains in Wale might seem a little out of reach for some of us, as Mari noted a goal is always a welcome way to get outside more often. So why not aim for the new Mud and Routes challenge in 2018 and try our list of the 25 Highest Mountains in Wales? And be sure to use our hashtag to let us know how you get on #Welsh25MudandRoutes 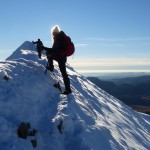