Posted as a walk in – Europe, Snowdonia National Park, The Moelwynion, Wales

Pathless route that would be improved as a circular route returning to Pen y Gwryd.

Navigation in mist from summit

Limited and paid for at Pen y Gwryd.

Sherpa Buses to and from Pen y Gwryd and Beddgelert

The hillside opposite the PYG on the flanks of Moel Siabod must feel left out of the party. All those visitors, parking on the verges and then yomping up the A4086 (I’ve just surprised myself by getting that right, normally A-some-number-or-other is the best I can do) past the hotel, and up the hill to Pen y Pass. This is usually achieved in double file, as the road is so wide there that there’s plenty of room to walk in the middle of the road (on both sides), of course there is….

This was a repeat of a trip i did a few years ago, but with the destination changed. Camping on the flanks of Siabod, the intention was then to return over Carnedd y Cribau and from there our options were open.

Now there are a few things when you’re walking that take all the resolve that you may be able to muster. Sitting in the PYG hotel with a pint of Guinness (or couple) when you know once it’s gone that you’ll have to venture out into the storm and erect your inner-first pitching tent in the pissing rain. You get a bad feeling about even getting that far when you feel wet through by just crossing the road. Visibility even at 300m was zero, and the wind lashed the rain into anywhere that wasn’t fully secured.

We crossed the stile opposite the PYG, and followed a faint path forward past the WW2 pill box (theres a fair few around here, this is the most obvious) and then right as the ground here is too dry and you’ll need to get used to the bogs sooner rather than later. There is a way across that’s not too bad, before heading directly uphill along a faint track towards the high ground to the South East (large ring contour 360m).

There’s some flattish and dry ground around here, but it was far too windy to pitch. Onwards towards the stream marked on the map as Nant-y-llys as the OS needed to offload some hyphens somewhere. The ground here is again quite boggy, and the small streams swollen today. It was getting darker too, an we knew if we saw no spot to camp we’d be turning back.

With a bit of compass work, and a bit more gut instinct, the river was reached, but it was obvious we’d be horribly exposed on the intended wild camp. Walking alongside the stream, i looked at a flattish section that was well above the raging stream, but also sheltered from the wind above. It would have to do. For the situation, it was a great spot. The Voyager tent can be squeezed into the most unlikely of places (including my front room, but that’s another tale) and tonight that was thankfully apparent. A highly efficient pitch was achieved in the rain, and the inner got no more than damp. We’d made it!

The home made curry that just needed warming up and the cans of Guinness we’d lugged up improved morale. I’m rapidly converting to the use of fresh foods for short overnighters. So long as you remove bulky packaging (especially tins!) and put the food into ziplocs, you’ll be ok. Tonight I made use of my rice cooker, putting the frozen curry in it’s bag into hot water. Leaving it there to warm through slowly while i boiled the rice up. Worked a treat.

The morning arrived and another culinary first. I’d blagged a free meal replacement from a company called Pro-gen. Mixing it up with powdered milk and water it made a milkshake that was pretty high in calories, but reasonably tasty and easy to finish off. It also brought some better weather. From Nant-y-llys, we were to ascend Siabod by first following the stream over rough ground to some boggier ground at Bwlch Rhiw’r ychen. There’s a fence here, so navigation really is a no brainer. Follow the grassy path up along the fence, and it’s a gently, if unexciting climb up. About right if you’re on an overnighter.

The path does leave the fence near the summit. It’s obvious where as you cross a stile and the terrain becomes rockier. You may well need to take a compass bearing in foul weather, like today, as the path can be a little unclear. Just remember that the path bears right to the summit, or you’ll end up on the path down to Capel. The summit isn’t particularly welcoming, just a trig and scant shelter. We suffered the strengthening wind rather than walking to the shelter i saw a distance away, and saw nothing in the clag. On a clear day though, the views from here towards Yr Wyddfa are superb.

Descent was meant to be easy. The now gale force cross winds made the going difficult. So it was with relief that the grassy ridge was left behind in favour of the minor summit beyond Bwlch Clorad that provided some respite from the wind. Beyond this we arrived at the stile in the fence that we’d left this morning and the fence needs to be followed up to Carnedd y Cribau, again across some minor boggy bits. The real bogs are later on. 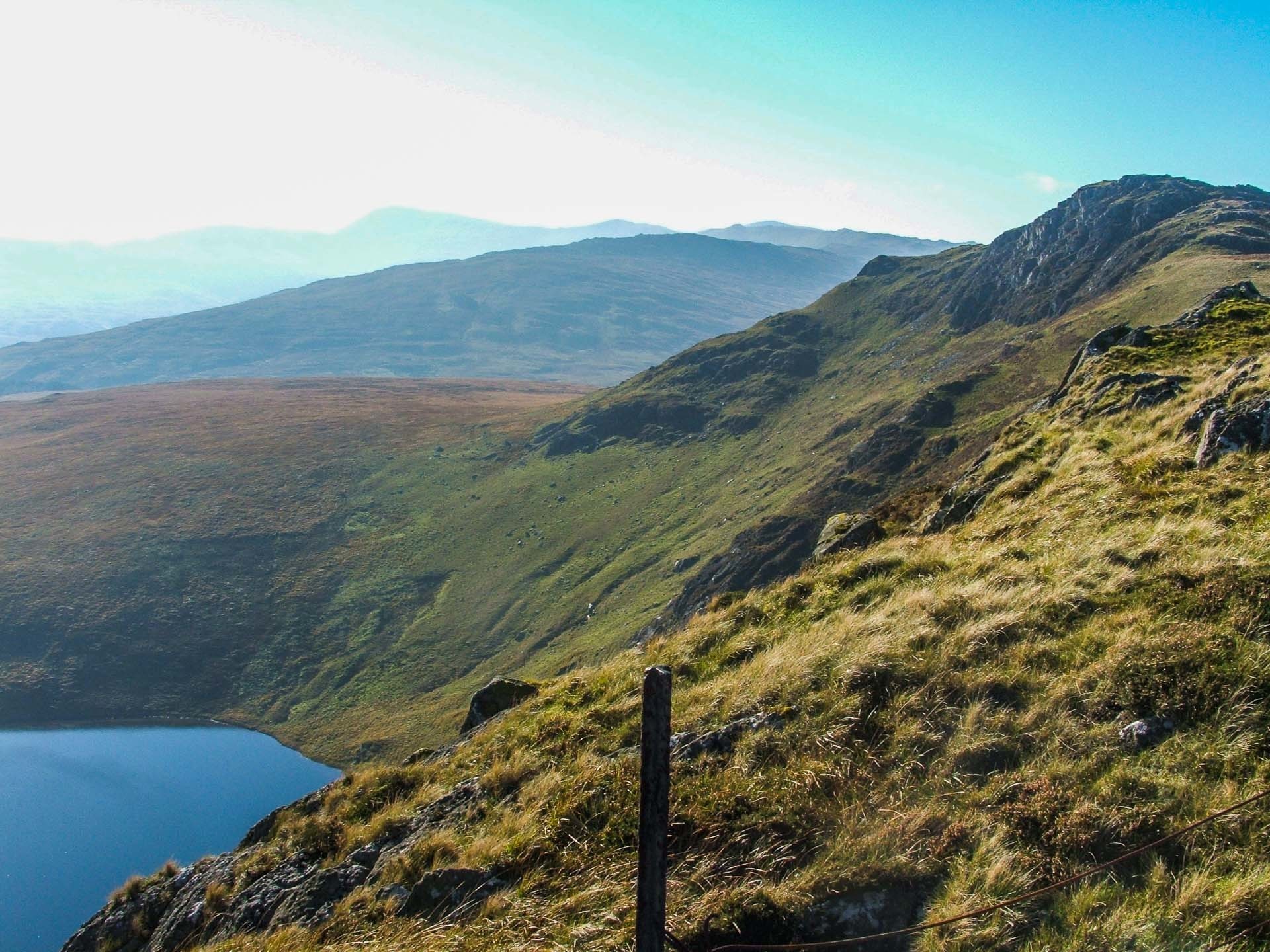 Carnedd y Cribau isn’t a summit on anyone’s list, and at 591m isn’t classed as a mountain. Don’t let that put you off. It’s a decent walk across varied terrain to a summit with it’s very own lake. The views across to Snowdon make it even better, if you get a better day than we did.  It shares much in common with Moel Meirch further up, in that it’s rocky and boggy. It’s also a complex terrain that would be a challenge to cross were it not for the fence that’ll take you all the way to Allt Fawr at the far end of the range. There’s also a path that varies from good to barely visible.  There’s often a path on both sides of the fence too, and the better one is invariably the one on the other side. Fortunately, the fence is low and easily crossed.

From the summit, you’ll descend rocky sections and pass a fair few boggy sections. At first sight, the bogs look nasty and the map suggests they are unavoidable on both side of the fence. The worst section is Bwlch Maen Pig, which isn’t even given a bog symbol on the map! I found it easy to cross on the left, heading for high ground. Beyond this it flattens out to cross wet ground before the final descent to Bwlch yr Rhediad  (more correctly Ehediad) takes you over steep crags. This is the only place to leave the fence as it would otherwise take you over cliffs. A number of paths lead off right, some steep while others took a more roundabout route to the col.

Overall, this section of hill is worth doing for the views and the surprising ruggedness, ideally continuing onwards to the Moelwynion beyond. Technically it’s the only other hill in the Siabod range, but they’re usually classed together.

The sad decision was taken here to drop down to Nant Gwynant as the strong winds would mean a poor night’s sleep, if we managed to pitch. So it was strange that within a short distance we found the wind had dropped and there was a number of spots in tall grass we could pitch. Water was nearby, and Snowdon kept on going in and out of cloud all evening. The sun even made an appearance! 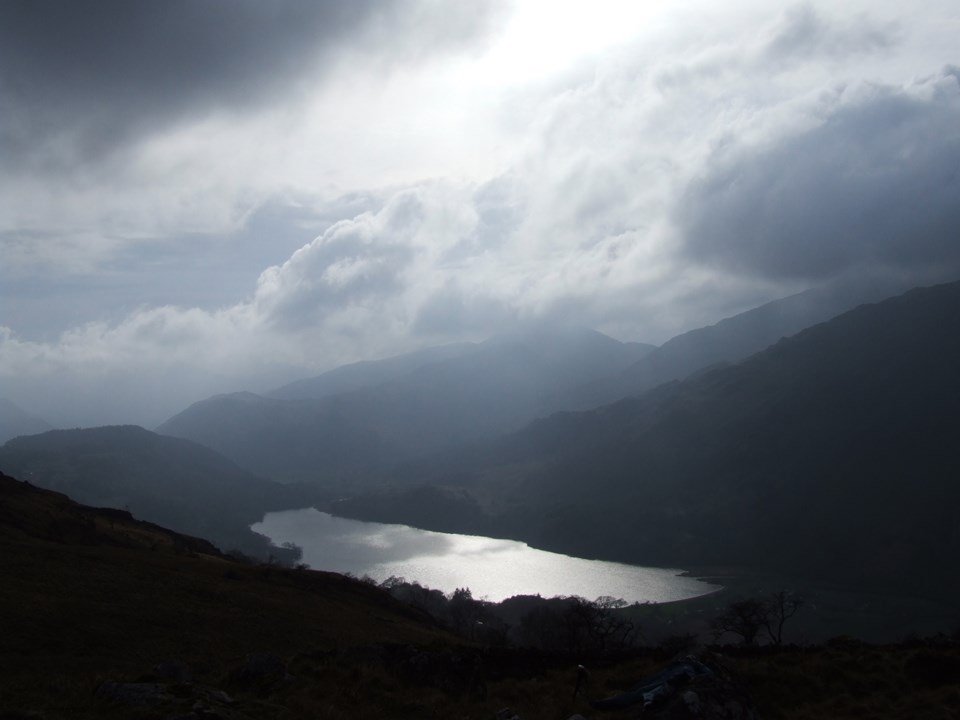 After you reach Bwlch y Rhediad, the path descends steeply to the main road in Nant Gwynant, where you need to cross the road and descend even further down to the old road. Turning right at the minor road, you’re left with an easy track back to Pen y Gwryd with a walk of 3km and around 200m of gentle ascent.