The Fairfield Horseshoe is one of the most famed routes in the entire Lake District – Fairfield is the highest point on this days outing.

Ambleside has plenty of hotels, pubs, B&Bs and toilets

Confident walkers should find no real difficulties on this walk, other than the overall length and elevation gain.

The summit plateau of Fairfield is very flat and can pose a navigational challenge in poor weather.

A large pay and display car park can be found in Ambleside on Rydal Road. A days parking will cost around £7 (up to 12 hours).

Plenty of buses come and go from Ambleside during the spring and summer including services from Chorley (X8), Kendal (505), Bowness / Windermere (599) and Lancaster (555). After the end of October, services become more limited.

The Fairfield Horseshoe is a high level walk around the valley of Rydal and can comfortably be considered one of the Lake District classics thanks to its combination of ridges, sweeping scenery and no-less than eight Wainwrights – all packed into just over 16 kilometres of superb fell-walking.

It is perhaps the most famous circuits in the Lakes and it’s hugely popular due to its proximity to Ambleside and Grasmere but don’t let that put you off. This walk is well worth your attention.

1 – Starting from Ambleside first requires a fairly easy stroll through the lowlands of the River Rothay. The route from Ambleside may depend on where you park but the destination and official starting point for this walk is the foot of Nab Scar, located next to Wordsworth’s old home at Rydal Mount (NY 36427 06402). This can be reached by either following the A591 to Rydal itself or passing through Rydal Park.

2 – Due to the popularity of this walk, a clear path is evident throughout. The first part of this makes a steep climb up the slopes of Nab Scar, eventually reaching a cairn at the summit. From Rydal Mount, head north along the road past the bus turning circle to find a gate at the end of a concrete track. Pass through it to pick up the pitched path to start your ascent, climbing over a ladder stile to enter open fellside. The path winds its way up the hillside to the top. Once on the summit, you can enjoy a superb view over Grasmere and Rydal Water.

3 – Ahead is the twin-topped Heron Pike, the furthest top officially being the highest point though, confusingly, it is the lower top that is classed as the Wainwright. After the initial ascent up Nab Scar, the 200m climb required to reach the summit will seem much easier. The view ahead opens up to reveal much of the rest of the day’s walk, with Fairfield dominating head of the valley.

4 – The next section is ridge walking of the highest order. Between Heron Pike and Fairfield lies Great Rigg linked by a high, grassy ridge, interrupted by the odd rocky knoll. Keep to the main crest of the ridge, avoiding any paths that lead back off, back down to the valley.

5 – The final climb from Great Rigg will lead you onto Fairfield’s extensive, flat summit. The stony top has no real features to guide navigation and the dozens of cairns and low shelters can be confusing in the mist. As with any broad summit, the best views can be found towards the edges. These are particularly good towards Helvellyn in the north.

6 – From Fairfield’s summit, the horseshoe route continues east initially before turning south east towards Hart Crag. The best walking for this section along the rim of the immense cliffs that line Fairfield’s northern face – careful if the clouds are down! Drop down into the col above Link Cove and make the brisk climb to Hart Crag’s summit, marked by a large stone cairn. 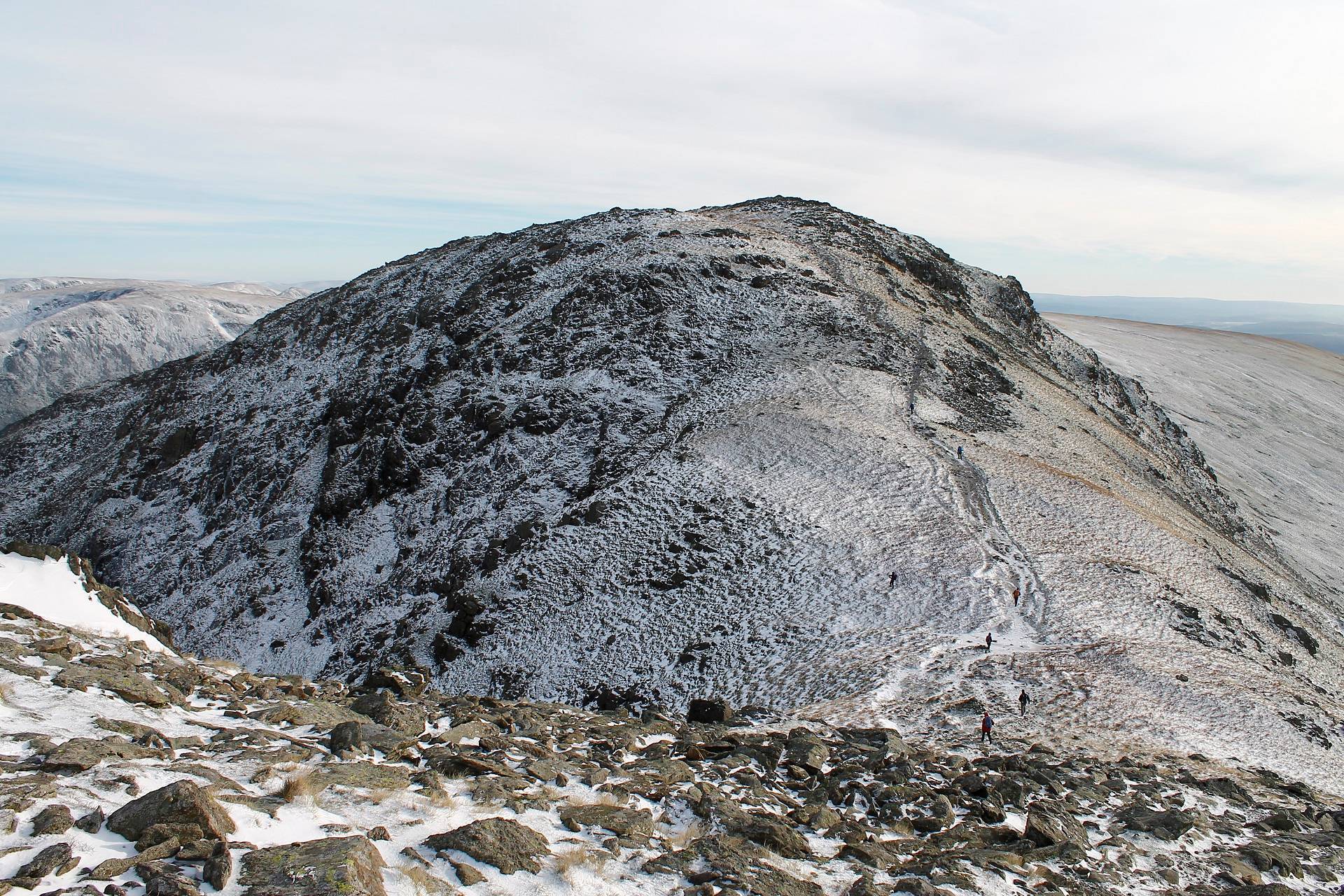 7 – The descent from Hart Crag is perhaps the most awkward section of the whole walk as the rocks can be greasy when wet. From the cairn, bear right, heading for Dove Crag, avoiding the temptation to follow a more obvious path that descends to Patterdale. The horseshoe path can easily be lost among the stony ground. That said, as you descend from the summit, the beginnings of a drystone wall emerge which can be followed for its length back towards Ambleside – useful if the weather closes in.

8 – Dove Crag, though largely unimpressive, was the first chapter written by Wainwright when he began cataloguing his favourite fells. It is reached by the final proper climb of the day, following the path from a broad, grassy depression.

9 – Now begins a long descent back to Ambleside. Following the wall, navigation is easy as the ridge crosses High Pike and Low Pike though a few steeper sections will need to be negotiated..

7 – After visiting Low Pike, continue to follow the wall. After clambering down High Brock Crags, there is a choice of endings. The first deviates from the wall and drops down to High Sweden Bridge in Scandale. The second stays faithful to the wall, following it to Low Sweden Bridge. Ultimately both routes will lead you directly back into the heart of Ambleside.

Dave is our Lake District local expert, often found in the depths of Cumbria he's the author of his own part on the web, All the Gear but no Idea.

Walk to Stanage Edge and Burbage Rocks from Hathersage

Forming the boundary between the High Peak of Derbyshire and South Yorkshire, Stanage Edge is...

A Walk to The Roaches and Lud’s Church

The Roaches are one of the last bastions of gritstone in the southern Peak District...

Walk up Mam Tor from Castleton

Mam Tor and the Great Ridge is perhaps the single most popular walk in the...