Posted as a walk in – Europe, Snowdonia National Park, The Glyderau, Wales, Walks with Lakes in Snowdonia, Winter Hill Walks in Snowdonia

Walk the Ogwen skyline with a wild approach to Y Garn via Cwm Clyd.

Navigation in mist on Glyderau.

This is a slight variation on the walk up Garn and Tryfan from last year, but includes an alternative ascent route via the tranquil Cwm Clyd and a quicker descent via Cwm Tryfan if it’s getting too late to climb Tryfan at the end of a long day.
The Route

starts at Ogwen Cottage and you need to take the path behind the National Park Office for Cwm Idwal. You almost immediately leave this path by following the path into the cleft in the rock known as Tin-pan Alley and the route is as obvious as it can be. You can keep on the original path and follow the flagstones  to Cwm Idwal, but this route is a bit quieter. Towards the end of the ‘alley’ the path climbs onto some wet ground, which you need to cross towards a stile and then make for the beach at the southern end of Llyn Idwal.

There’s an obvious path around the lake (the one that you originally started out on!) and through a gate to the right you now need to take off over some damp ground. You’re heading roughly for the stream at SH641 598 that seems to drop vertically from the hanging valley above. Take the shortest route if it’s dry, or alternatively follow the good path and turn right once you can follow the slightly raised ground around the wet area.

Looking up the slope, you may see a faint path initially but this becomes much clearer as you pull up the slope, even turning into steps as you near the top! While it is a pretty relentless pull, it’s a fine route with the pinnacles on Castell y Geifr giving the area a Lord of the Rings feel in mist. Finally, it relents and you reach the far end of Llyn Clyd – translates as snug or cosy which it certainly is nestling in the chair shaped cwm.

A faint path takes you NE and then north to the NE ridge, which is another steep pull but a fine ridge walk. It felt particularly exposed today with the deep snow and as it becomes steeper towards the skyline, we had to cut through the build up of snow to attain the main ridge. It wasn’t quite a cornice, but would have caused problems if it had not been soft enough to cut through.

You might feel frustrated at this point as you can see the path carry on uphill to the left, but don’t worry as it’s only a matter of minutes to the top. On a clear day, the view into Nant Ffrancon and towards Tryfan and Glyder Fawr is spectacular. There’s Yr Wyddfa in the other direction, and Crib Goch, and as it’s a reasonably sharp summit, it makes a fine viewpoint.

The next section is mentioned in a couple of routes (Glyderau from Deiniolen, Glyderau and Gribin, Tryfan) and the most important thing in mist is that you take a bearing from the summit. I’m always taking a gut feeling and tend to go too far right. Pass Llyn y Cwn – frozen today, and tackle the nasty scree of Glyder Fawr. We ended up on a particularly steep snow slope and had to contour around to one of the paths. It looked ok from the base, but the further we ascended the steeper it got.

Thankfully, we arrives at the summit plateau of Glyder Fawr and followed the path and cairns to the summit. More cairns lead you towards Bwlch y Ddau Glyder (yes, it’s Ddwy on the map, the OS have their noun genders wrong) where the path drops down off the plateau to the right and contours above Cwm Ffynnon before passing underneath Castell y Gwynt. This is a crenellated formation of frost shattered rock, and definitely worth a scramble over. The path is clear but it  isn’t’ particularly obvious where you start ascending. I’ve found that if you continue on the contouring path, you find more hassles than you avoid, so ascend as soon as Castell y Gwynt is past. The GPX file shows you where the best path is, roughly following the uprighty stroke of the Y of the Glyder in Bwlch y Ddwy-Glyder on the Explorer map.

Plod on over the plateau of Glyder Fach, and the Miner’s Path down can be problematic to find. It’s a boulder strewn slope, and you can pretty much make your own way down if you have to, but the path does make it easier. We seemed to find a route somewhat south of the one marked on the map, but it’s the one I used last time I ascended by this way. There has to be another path further north as you soon join up with this. 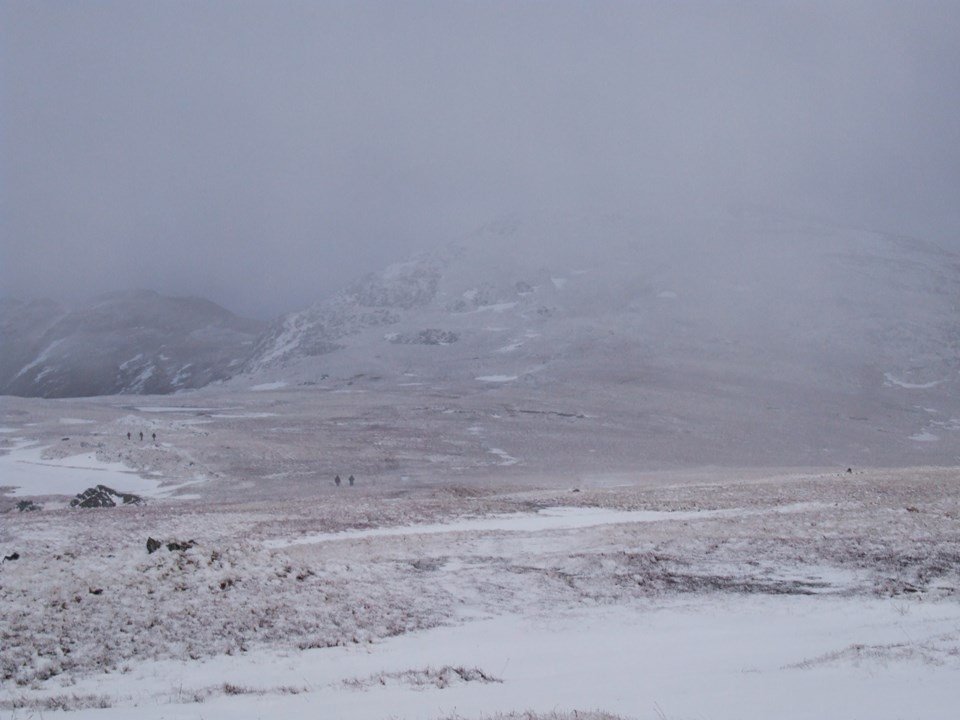 By the base of the slope, but before it flattens and you reach Llyn y Caseg Fraith, the descent path descends sharply to your left at SH667 582 and is easy to miss in snow. We walked on to the lake before we realised we’d gone too far. We returned to the right spot, which we’d passed before as the path wasn’t visible under all the snow. It is rather steep and slippery for the first section but soon levels out into a pleasant track that either takes you to Bwlch Tryfan or you can follow the river right at SH665 583 and the track that runs along side. Bristly Ridge and Tryfan dominate the sky.

The path now is easy and widens as the path from Bwlch Tryfan merges with this one. The three summits of Tryfan becoming most apparent from this angle as they tower 300m above. Eventually, you’ll pass through a stone wall where the path vanishes on the map, but is perfectly clear on the ground. There’s steps leading down past Tryfan Bach and to the Farm and campsite at Gwern Gof Uchaf. It’s a matter of turning left on the old Telford road and then the modern road to Ogwen. If you’ve got the time, it’s worth avoiding the main road by crossing to Glan Denau and following the footpath across the far end of the lake. It was dark at this point for us, so the quickest route seemed the best option.