Classic circuit of Cnicht and the Moelwyn hills.

Navigation skill is needed for this walk, especially in mist.

Sherpa Buses to Garreg from Beddgelert. Some buses to Croesor from Porthmadog.

This is the classic Snowdonia circuit of Moelwyn Bach, Moelwyn Mawr (The Moelwynion and NEVER the moelwyns) and Cnicht from Croesor, but one usually done in the opposite direction. But who is to say which is the right one? Our decision was based on camping half way around, and we wanted to do most of the hard work on the Saturday, leaving an easy descent on the Sunday. It’s more of a day walk than a backpack.

Croesor is a remote village that can only be reached by a narrow minor road. It may only be 3 Km from the main road, but it has the feel of being off the beaten track. It used to be the main road from Nantmor over to Maentwrog, but sees no through traffic today. Croesor owes its existence to the slate industry, of which you’ll see plenty of evidence on this walk, and even had as school until a few years back.

The Walk up Moelwyn Mawr and Cnicht

The walk into the Moelwynion starts at the crossroads in the centre of the village. To the left there’s the National Park car park which you might have driven to. We need to turn right (with the road back to Garreg behind us) up a minor road (although, they all area around here). This steepens, and you don’t get much time to warm up on this little stretch. After a little over a kilometre, you arrive at a forest with a newly built stile for access. Cross this and enter the forest, following the path along it’s edge. The path was very wet, and basically a stream in sections.

Beyond the shade of the forest, you are on open moor, and the grassy ridge we’re aiming for is to our right. Cnicht and Moelwyn Mawr are also prominent on the skyline. Cross the boggy stretch of moor, and you find the faint path is following a ditch. Keep with this path until you are nearer the ridge, when it’s best to just head uphill immediately. There isn’t much of a path, but it is possible to follow some sort of track all the way to the grassy summit of Moelwyn Bach.

Once up here, the terrain changes. Moelwyn Mawr and Craigysgafn are much craggier, and so is the parts of Moelwyn Bach that are now in view. The most important bit of navigation today is off the summit. Don’t head directly for Moelwyn Mawr, as there is a great big overhanging crag in the way. To avoid certain death, head away from Moelwyn Mawr, and the path descends a grassy slope before intercepting a scree path. This may be a rather loose and uncomfortable descent, but undoubtedly better than the direct route.

The Bwlch Stwlan has a small track that contours the hillside parallel to the route you have just taken. On such a windy day, this was a relief, and we found it sufficiently sheltered to knock up a brew. Of course, on further exploration, we found a roofless hut that would have been even better!

Craigysgafn ahead involves a little ‘scrambling’, but nothing major. The wind today made it a bit more exciting! The views down into Cwm Stwlan to the lake make it all the more so. The rock section is over too soon, and you are ascending a final slog to the summit of Moelwyn Mawr. There is no shelter on top, but some superb views and something that’s fast becoming a rarity, a trig point.

We descended back to the path we ascended on, and turned left down towards a blunt, grassy ridge. If you keep right, then you can descend nearer to Moel yr Hydd. The grassy ridge, which is just discernible on the map, is the more direct route towards Rhosydd Quarry. Here, you arrive at some buildings which are a little below you, but there is a path past them, and also one to your right. You will need to go past the buildings and down a path with slate heaps high to either side. This track takes you all the way down to the main quarry buildings (SH665 462) which you can explore with care. Be warned though, that the final section of path has become a stream. You may walk it easily, or avoid it by crossing between the track and a tiny reservoir just before the quarry.

The path now continues forwards and left, over some boggy terrain, and sometimes faintly. However, it is reasonably easy to follow all the way to the high ground above Llyn yr Adar. We, however, being intrepid explorers, decided to take the cross country route to Llyn yr Adar. Yes, the path was too easy for us today, not that we couldn’t find it or anything. Well, we went off path to look for a campsite, but found nothing. So, decided to take the direct route to Llyn yr Adar, no matter what. Oh, and it had started to rain.

We did make it eventually to Llyn yr Adar with light rapidly failing, the wind strengthening and the rain getting heavier. We were not too impressed by the state the place was in, with some idiots having left the prime spot as a tip. We had to camp there as it was the most sheltered spot and that was fortunate with the tent blowing in all directions during the night.

Morning finally came, and I’d had no sleep. Still, I felt good and breakfast on the hill is always great. It was a better morning than the previous evening, and we could cook and eat outside. I took my time, and it was nearly ten before the tent was packed and we were on the way up Cnicht.

Cnicht is easy from here, aim for the high ground, and turn right along the summit ridge. If you’re doing a day walk, then the path brings you onto the Cnicht summit ridge and leaving an easy climb to the top. Make the most of it, as you’re downhill the rest of the way. We were put a bit to shame as there were two middle aged gents on top who’d done the same route as us, but had started it this morning!

The descent path from Cnicht isn’t too tricky, slightly eroded but not overly so. Before you know it, the slope has eased, and you’re on a green path that’s easy on the feet. This takes you to a track, where you turn left into a forest and this track takes you back to the car park in a matter of minutes. 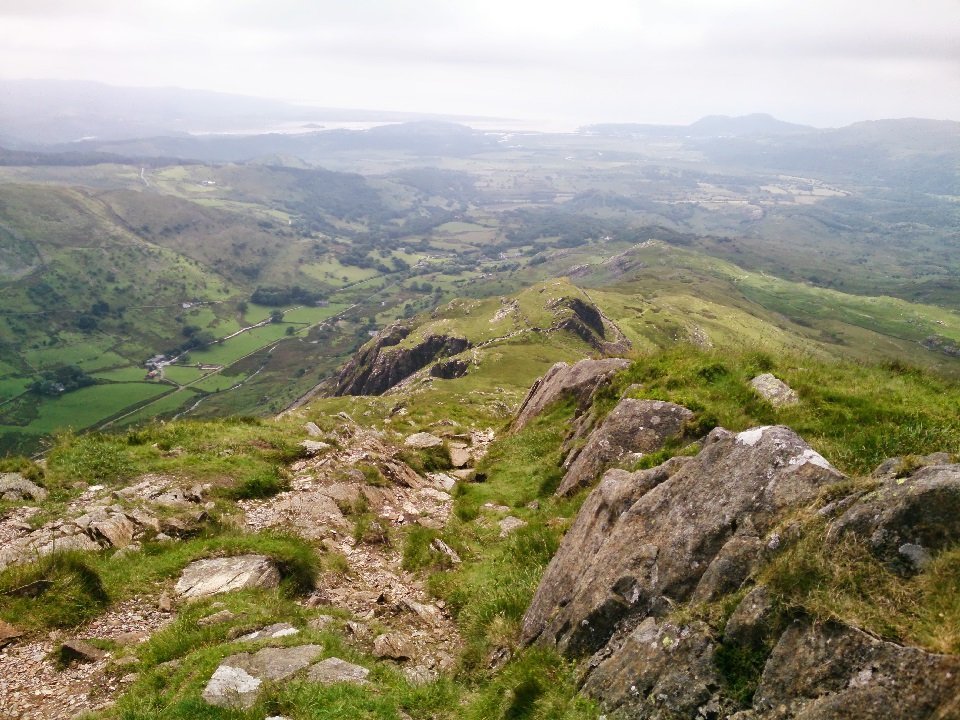 All the Walking Routes up Yr Wyddfa (Snowdon) 2023