We were impressed with the Led Lenser H7 when it was first out so when it finally gave in on me a few weeks ago (which was promptly replaced by the company) I nearly went for a like for like replacement. Of course, when I found out that there was now a newer version that was twice as bright, the Led Lenser H14, and unfortunately twice as expensive at time of purchase, I just had to have it for my night runs. It would also be another toy to review for Mud and Routes.

You can mount the light on handlebars, and it comes complete with the mounting, which is a simple matter of un-clipping the light from the headband and inserting it into the bracket. There’s also an extension cable provided if you want to store the battery elsewhere, perhaps to keep it from the cold in the winter. This is also useful for runners who might not want the batteries on their head, but clipped to their belt instead.

I found the complete light wasn’t too heavy to run with, but clipping the battery pack to my waist for the first few uses made it much easier to control the settings until I got used to it, and might be a more practical way to use it if you find it’s a bit heavy. I really miss the simple dimming lever that the Led Lenser H7 had on the rear, which is replaced by a single button that you have to ‘touch’ softly and keep it pressed in order for the light to begin to dim. This is far from ideal, but you can still quickly dim the light with one touch, and that’s enough for most uses. I found that I didn’t actually use the dimmer, sticking instead to the simplicity of either full or low settings.

There’s a multitude of settings with the torch that I tried to get to grips with, but failed. You can choose a programme to suit, such as security where the the strobing ‘security’ settings are easier to get to, an Easy setting and the professional setting that’s got a got of everything. found all this a bit overkill with a head-torch, where the only settings I’d need are on,off, fade and a flash/strobe effect.

The light can be focused by the simple movement of the light section in or out. At it’s narrowest, the beam illuminates so far that you can’t see what’s there anyway as it’s too far away. You’ll need to have a bit of a play with this to see what works for you. The narrow beam is great/poor for blinding dog walkers and others coming towards you. It never ceases to amaze me that even in the pitch dark, you’ll still find people walking in black with no torches or reflective kit. You usually spot them due to the light reflecting from the dog’s eyes, but you could easily cycle into one of these guys on tighter bends no matter how good your lights are! One guy walks his dog wearing some sort of reflective worker’s jacket and pants, he lights up like a Christmas tree from a frightening distance. Don’t, whatever you do, shine this at any reflective signs close up as you’ll be momentarily blinded!

Though seriously, you do need to take care with pointing the light at on-comers as it really is that bright. I usually ‘dip’ my head-torch in order not to dazzle others, but with those mentioned above, the H14 makes it easier to spot them so you can dip. This is something that I likewise do for oncoming traffic as well as this really is that bright. Cars will often slow down for you as well, as I don’t think that they know what it is that’s approaching them on their side of the road with such a bright light! So as a pedestrian, you need to use this with caution and take care not to dazzle traffic. On the plus side, cars are more likely to dip their lights, unlike the sizeable minority of idiots who think it’s a sport to blind the runner with their lights.

The CREE LED light chip produces a staggering 210 lumens, but that’s a fraction of what the Magicshine bike lights are officially meant to produce. The Magicshine gets you off mountains in the dark, safely, and we had to do a like for like comparison between them. The main difference is that you can’t focus the Magicshine, while you can tightly focus the Led Lenser. This meant that items nearby were much better illuminated by the Magicshine, but you could use the LED Lenser H14 in focused mode to spot items further in the distance.

The only unscientific test that we did was across the estuary at Caernarfon. It lit up a section of whitewashed wall from 0.3km away, and if it lit anything else up further along then it was just too far away for us to determine.

Battery life is certainly a casualty of the power of this head torch. You get nowt for nowt, and you’ll need a decent stock of batteries in order to get the most from this. Ideally some rechargeable batteries as you could easily need to replace the batteries every couple of weeks during the winter, more so if you use it for your daily commute as well. We managed only a couple of runs out of the supplied batteries, while a full set of lithium batteries managed about 5 hours. Annoyingly, the torch slow flashes three times to let you know the battery is low. As this happens with no warning, it can be dangerous, especially if you’re on a section of run that needs you to watch your footing. While you could use it at a lower setting to squeeze a bit more life out of the batteries, that really defeats the whole point of owning such a powerful lamp in my opinion.

This isn’t just a headlamp, the battery compartment and the lamp are removable. For walking you can clip the torch to your belt in order to have a lower light rather than on your head. In practice, I prefer the light on my head as it’s more controllable, and you’ll need to work out where you can clip this in order for it to be effective (rucksack belt was the best we found). This head torch is just about ideal for getting off a mountain in the dark, and will probably find it’s way on winter camping trips despite the weight. There’s also a sturdy handlebar attachment, with the lamp and battery just clipping in, and as a result being easily removed during the day for the commute or even for riding a few night trails. You can also clip the lamp onto the battery pack directly in order to use it as a spotlight while camping, though that’ll certainly light up your tent.

The only question is, do you really need such a powerful head torch for running? The cheaper and less powerful H7 will certainly suffice, but I like a decent light to run by and they don’t get any more decent than the H14. It makes night time running a doddle, being ideally suited for trail running at night. Just be warned that once you’ve gone for such a powerful lamp, you’ll find it difficult to return to anything else afterwards. 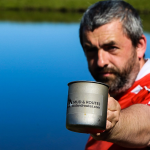 Tal y Fan is the northernmost mountain in Wales, and one of the awkward outliers...

There are a number of walks into the Carneddau from Bethesda, but the route up...