If you’ve read our recent article on the Beauty of Bivvying, or better still got yourself a copy of Book of the Bivvy, then you’ll more than likely be after a bivvy bag.

The Rab Survival Zone is the classic budget bag. You get the Rab name, and as always the high quality that goes with it, but at a distinctly non-Rab price point. For many  years it was the cheapest bag out there that you wouldn’t expect to fall apart at the seams after one use, though now the likes of Alpkit have taken over that role with their Hunka.

What can you say about a bivvy bag? Other than in the same vein as four candles being handles for forks, a bivvy bag is just that. A bag, for bivvying in. Of course, you may well get extra bells and whistles on them, even to the point where they have hoops and the like and can no longer be called a bivvy bag in my opinion. If you can’t taste the inner side of the bivvy with your tongue, then you’ve got a mini tent, or your head’s fallen out of the bag.

The Survival Zone is also a winner as regard weight. At only 320g for the latest model, it may not be the lightest bivvy out there, but you need to be spending serious cash to get anything significantly lighter. Possibly the Survival Zone Lite, at 200g, though at £89 it’s a tenner cheaper! We know which one we’d go for if we were buying the new model.

The Survival Zone in it’s many guises has only a drawstring hood, which means there’s always a small opening open to the elements. You’ll need to shell out a bit more in order to get a proper hood. The fabric, depending on the vintage, is waterproof and manufactured from breathable Pertex Shield fabric on the newest model. The only label I can find on mine says 5/-. 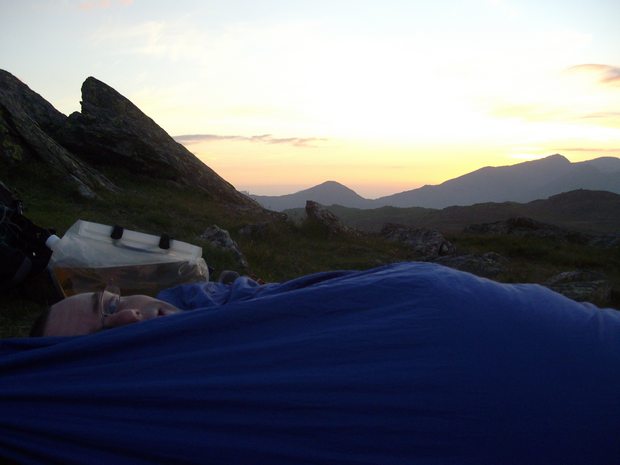 You can use the Survival Zone as an occasional bivvy, as it itsn’t totally closed off, or ideally beneath a tarp for typical UK conditions. It’s also very useful for winter camping as a sleeping bag cover in your tent or even for snow holing, as an extra layer of protection for your bag. It will also be slightly warmer than a bag alone, which is an added bonus.

If you’re looking for a reasonably priced bivvy bag that will probably outlast you, then the Survival Zone is one to consider. Mine is well over 5 years old and going strong after a fair bit of use. The only issue with the newer model is the choice of colours – it’s either bright orange (great for survival) or olive (great for survivalists), while I’d prefer something like blue or black that’s still discreet enough but at least you’ll find the bag when you return from your midnight pee as it’s distinguishable from the landscape around it.

Llwytmor and Foel Fras from Aber

There are several routes into the Carneddau from Aber, and this one up Llwytmor and...

Carneddau From Bethesda via Cwm Caseg

There are three valleys to the west of the Carneddau. The northernmost isn't named on...

Creigiau Gleision is a rarely visited peak to the north of Capel Curig in the...